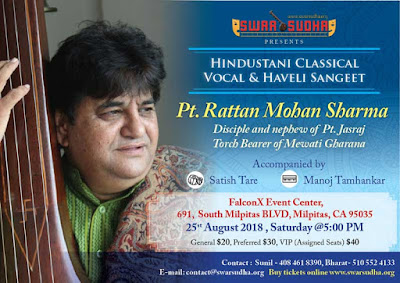 
Pt. Jasraj resurrected this form of music and made it popular. Check the video below
Rattanji has received several awards but the closest to his heart is the title of "Badshaah-e-Taraana". Check out his taraanas.
Tickets:
General $20,
Preferred $30,
VIP (Assigned seats) $40
Venue:
ICC, 525 Los Coches St, Milpitas, CA 95035
Posted by Makarand at 11:25 PM 1 comment: